There Is Power in the Union

Feeling like only someone who felt like that about that about Thatcher could understand how I felt about Reagan.

Walking up the stairs from the Tube stop and having my friend Fran say "I don't know how someone could break up with you because they thought you were 'too mainstream.'"

Being in a small club (Dingwalls? The Hackney Empire? Somewhere in Highgate? I don't know...) seeing Billy Bragg live for the first time.

Wearing out my live cassette tape of "Talking with the Taxman About Poetry" while drinking cheap wine from the corner store.

Understanding what it meant to be part of a force. Finding myself.

Feeling the importance of a union now even more that I understand it better (hat tip to SEIU).

Tonight seeing Billy Bragg at the Fine Line was part of all that, just *a few* years later. 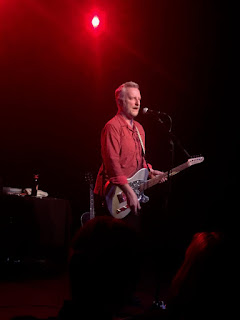 leenah said…
i'm checking FB for locals who are into Billy Bragg, and i found this post. i got to sit in a very small auditorium while he discussed and answered questions from a harvard law professor about his (billy's) latest book, last night. i didn't stay to get the book personalized, but i was there, and have a signed copy. and i just won tix for thrursday night - all three nights are sold out. i am blessed.
i think of you often. love you.
October 2, 2019 at 4:38 PM