Showing posts from February, 2013
Show all

The B-Word vs. the C-Word

February 26, 2013
One of the great things about having a circus as a client is that there's always something unexpected going on. This morning, the person who works near me was trying to choose some sea shanties for an upcoming show, but running into problems because they generally are not toddler-friendly in terms of language or content. (shock).

I suggested a group called the Ditty Bops, who do slightly more innocuous versions — though I warned her that I find them impossibly twee — though qualified that with "Yes, but I am generally just a bitch."

"Yes," replied Rainy, but you see, bitches get things done."

Which I realized might as well be my tag-line.

Compare that with the incredibly offensive (and in no way satiric) Onion tweet following the moderately offensive Oscar awards this week.

You see, folks, calling a woman a name is a slippery slope. In general, you don't want to do it. 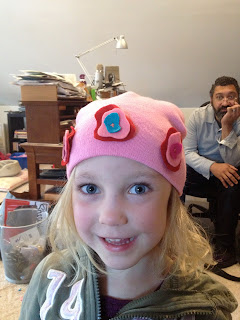 Continuing the crafty theme, the other night my friend Krista came over to create.

We started with dinner, and a hot fudge cake from one of my Pinterest board that broke my moratorium on rich desserts.

Then, we headed upstairs. My goal for the evening was to make felt flowers, so I made the two pink and blue pins in the picture. Krista, who has far greater artistic sensibility than I do, made the funky embroidered pin. And Beatrix spread glue all over big pieces of felt and then encrusted them with glitter. Everyone was happy!

Later that night I made Beatrix the pink flower hat, because she covets my hat with flowers. She wore it skating the next day. 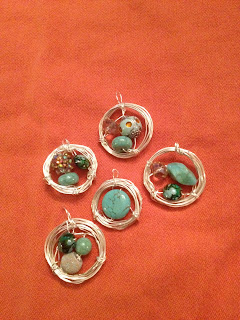 Yes, you read the title right. These are items I made for Christmas presents, but could not post until after Christmas so people would not see them. And then January/early February kind of got away from me...

The bird feeders were the first thing we made, and were a family project. Beatrix really enjoyed shaping them and pressing them out of the molds.

I had seen the necklace idea on Pinterest, and ended up at Joann Fabrics for far too long one evening falling in love with various beads. I made most of them for friends, but admit to keeping one for myself.

I also made some very successful spiced nuts. I did not, however, chronicle the dismal fail at "shower discs" that I tried with a baking soda/essential oil base in paper muffin cups. They were absolutely useless!

February 15, 2013
My Valentine's Day was just about perfect, and not in the stereotypical lobster/diamonds/champagne way, or even the way I would have celebrated in the past, but in a way that reflects my life now.

Beatrix's school, rather than having valentines for each child, has the parents make valentines for their child and put them up on the wall. The night before, Patrick put tons of thought into making a Valentine's Day puzzle for Beatrix, because she loves puzzles. She was so happy to see it up on the wall of her school.

That morning, we had Beatrix bring up the Valentine's day gift of the sunny orange shirt we had gotten for my mother-in-law. We wanted to make sure the day was great for her, too!

I got Patrick a subscription to Bespoke Post, and pretty much hit it out of the park. He loves the curated "awesome boxes" of lovely, manly treats (and who does not like to get mail?)

Patrick's gifts to me and Beatrix were perfect — all about fixing broken things. For Be…
Post a Comment
Read more 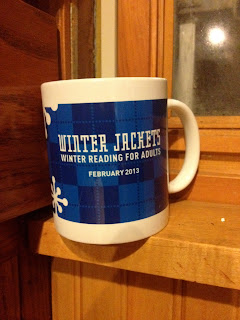 Every year, in February, the Saint Paul Public Libraries do an awesome reading promotion called Winter Jackets. See that lovely mug? I got it free just by stopping in and writing up a book review for them to promote (double points — I reviewed Patrick's book Enough). And I think when Patrick goes to get his matching mug, he may review our friend Kelly's books.

We already have a red set, which is kind of wearing out (I think they are 2 years old). We got those by turning in a booklist of five books.

This year, there is also a promotion where you can read away your library fine. Sit in front of the fire, read, and erase something I feel guilty about? I am so there!

We've recently starting reading nightly with Beatrix. I know — you say "Recently?!" We would read before, but in fits and starts. Now, almost every night, we sit down and all read together. Whoever is not reading to Beatrix reads on their own, preferably from a book rather than a screen (I'll admit,…
Post a Comment
Read more
More posts