Pandemic Projects - How Does Your Garden Grow? 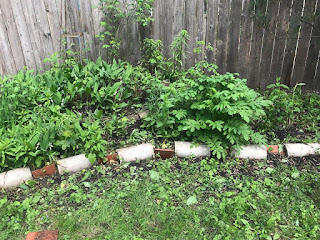 It was supposed to rain all day. But it didn't. So we did some garden work instead.

The front garden bed had long been defined by some concrete pieces I had gotten in Chicago in 2003 and some old floor tiles. It worked, but it was not doing it for me anymore.

So I replaced them with some beautiful, iron Victorian pieces I had gotten free off a BST board. It was *not* the easy, "just stick them in the ground" project I had envisioned, but I like how it came out.

We also livened up a dim corner of the back yard. I don't really like host, but it's somehow better in a pot? (and that corner is really shady).

The reward for all that gardening? Beautiful flowers.

I Don't Know What the Next Steps Are. Do You? 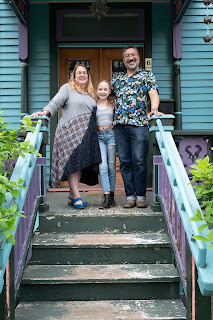 Beatrix is in bed. We're on the 3rd floor working. We occasionally stream music that one or the other of us runs into in this weird time of online creation (right now it's Billy Bragg, "Waiting for the Great Leap Forward"). I'm drinking a rhubarbarita made with the last of the rhubarb I got from my friend Jenn, and working on PPP loan forgiveness calculations for clients.

Tonight was the SPA Showcase online — the final one of the year because school ends next week. Beatrix performed a video of "Part of that World" in it, and her choir did an amazing job of performing pieces together via individual google hangout boxes. If the current guidelines hold and she can't do choir next year I don't want to even think about it.

There was a similar consolidated dance number at the end and B contributed some circus tricks. The art and performances were beautiful and got me very teary. It's struck me all year how strongly SPA has managed to integrate the…
Post a Comment
Read more

May 18, 2020
I've done plenty of complaining about how current restrictions suck (because they do, even of they help keep us safe) and all the things I miss (short list: seeing friends, seeing live and visual art, going to bars and restaurants, date nights, random shopping for no particular purpose). But these are some things I'll miss about our life over the past several weeks:

-  Walks.
-  Watching the Bindlestiff Family Cirkus livestream.
-  Watching other cool livestreams — it seems like there is always something popping up on my stream, like the Jayhawks jamming in their living room, or Ben Folds playing in in an AirBnB in Australia, or other cool things.
-  Roomba League.
-  Mr. Howe's Story Corner, the Showcases, and the SPA weekly virtual assemblies.
-  Eavesdropping on Beatrix's classes while she does virtual school.
-  Sleeping in and drinking coffee in bed.
-  Delicious meals at home.
-  Baking.
-  Family reading time.
-  Taking the time to watch mini-series in just a fe…
Post a Comment
Read more 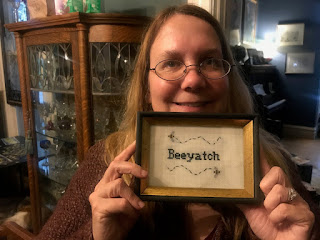 While yesterday was a Major Big Project Deal of taking off the layers of flooring in the upstairs hallway, I can't show you yet because those pictures are waiting for a Big Hallway Reveal. Suffice it to say that Patrick worked his butt off, while I drove Beatrix around on her errands (yes, she's getting to be that age.)

But today, after delivering some plants and some of the dog treats that Beatrix had made to her friends' dogs (all in the rain), we tackled some work on the 3rd floor.

I had originally intended to be craft, but that got foiled when my sewing machine had some tension issues with the bobbin. Patrick fixed it though, and we think he should start a new business called "Of Course I Can Fix Your Sewing machine - I Can Fix Macs, Can't I?"

Meanwhile, I finally framed the cross stitch I had done with my friend Anna a couple of years ago:

I also attacked a big stack of mending. My sewing skills are kind of "costume shop adequate" on a good day…
Post a Comment
Read more

Because he knows what to do in a trench. Ingenuitive. 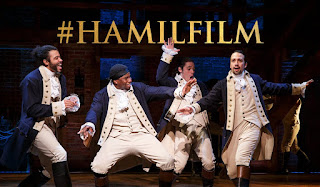 Right about the time we went into stay-at-home I started to listed to Hamilton a lot more again.

Maybe it was prompted by a bootleg copy then was up on YouTube for about 3 and a half minutes. Maybe it was the John Krasinski "Some Good News" zoom call. Maybe it was just what I was needing.

But I also noticed Lin-Manuel Miranda popping up more actively on my Twitter feed, doing more things, playing more pieces, quite obviously working something through his mind.

I even said to Patrick "Wouldn't it be AMAZING if they released the Hamilton movie early?"

You see, seeing Hamilton on Broadway, with the original cast, was a really life-changing theater moment for me (ok, and well everyone else too, I'm not a special snowflake on this one).

But then, as we walked back to the hotel, I was overtaken with a profound sense of sadness, that I would NEVER have that experience again, seeing those people do that show. It's one of the reasons I have not seen any of the o…
Post a Comment
Read more 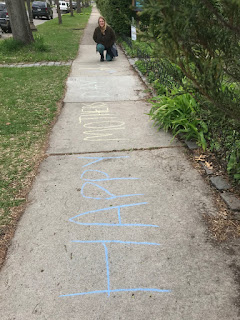 Mother's Day. Whatever your relationship is with or as a mother, a day that's likely to be fraught. So in some ways, during a pandemic, when you can throw all that out the window it's better.

We actually started celebrating last night, when we played a game of Forbidden Island and watched The Notebook, which I had never seen. Spoiler - I was not as gutted by it as everyone else I know who's seen it, meaning I apparently have a heart of stone.

I slept in today and got breakfast in bed, and then went on a scavenger hunt to find my presents, which was really fun. Beatrix went all out in the prep:

Beatrix was also in charge of the family activity, which was making pom-pom hedgehogs:


My family has, since I was a child, gone out for Mother's Day brunch. My grandfather used to treat everyone to a big buffet brunch, and my aunt and uncle had taken it over. Obviously that was out this year, but somehow my cousin Erin, who has been incredibly resourceful the entire pandemic …
Post a Comment
Read more

The Small Things That Make It Better

Like one day seems pretty good, and you're happy to be with your family, and most of all, you're not sick.

And then the next day you're down and it seems like way too much to deal with for another day much less likely the next few years, and your whole family is sick-and-tired of each other and snaps and things that are important to you keep getting broken and you're tired and so incredibly stressed out and mother's day is coming up and you hate that holiday. (that was yesterday for me, in case you were wondering)

So today was better and it made me realize how much people's kind thoughts and gestures can mean, always, but especially now.

My friend Jen gave me rhubarb stems so I can make rhubarbaritas (and maybe I'll have to try cordial too).

My friend Reba gave me a whole hydrangea tree to replace the one in our back yard that did not make it through the winter. (How do plant…
Post a Comment
Read more
More posts