Showing posts from January, 2017
Show all

January 27, 2017
Who would ever think that Liquor Lyle's would be the perfect place for a wake? Almost another lifetime ago, off and on at the end of high school, into college, and when I first moved back to Minnesota, I worked part-time at the Guthrie box office. This was back when the Guthrie was the award-winning Rip Rapson building attached to the Walker, with one thrust stage, a sprawling backstage area that included a staff bar called the Dram Shop, and the best damn box office in the Twin Cities. The box office manager was Pam Truesdell, who, by the time she hired me, was already a Guthrie legend. Tucked back in the windowless back corner of the office, smoking god-knows-how-many packs of cigarettes a day, Pam ran that office with an iron hand. A typo on an order resulted in a "print-screen," posted on the board for everyone to see. More than 2 rings before you picked up the phone and you heard about it. And if you had worked your way up to the front window, you had better trea
Post a Comment
Read more

The Night Before the Inauguration 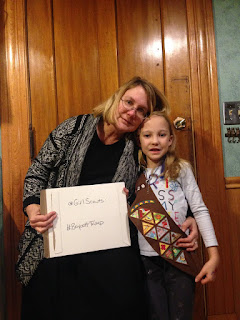 I'm thinking a lot today about losing my voice. There have been lots of times in the past where I have not believed in my political leaders — in fact, when I have disagreed with them. But I have always felt like I could express my opinion. That I could stand up and fight. That maybe I made an impact, if not a difference. I'm not so sure of that right now. I'm scared of repercussions, of what might happen to my family. And everything seems like a painful reminder of what we are losing, to the point where even looking over Beatrix's shoulder when she is watching Glee puts me into tears. I'm not even sure I should be writing this now. Tonight I went down to Park Square Theater for the #ghostlightproject. People gathered in front of theaters all over the country at 5:30 to gather as artists, to talk about who they are and what they stand for, and to know that we have each other. It was incredibly poignant and moving. When Beatrix got home from school, we took
Post a Comment
Read more

Having failed so spectacular on my New Year's resolutions last year, I did not really set any thing year. But my husband is pretty ace at meditation, and I have been fascinated by how he succeeds at it. I, on the other hand, generally suck at meditation. Once I managed it, under a kind of punk-rock guided meditation session by Russell Simmons. But otherwise, as much as I know it's good for me, as much as I know I should, I just can't. So why pick up this book? Well, it seems achievable, for one thing. It's 52 meditations, basically one a week (ok, I got in in January so I'm already a little behind. But bear with me). It works along with a journal, which I like. I can journal. And the themes and ideas ("Are You A People Fixer?" "Trusting Your Creativity") are compelling. It comes at the idea of meditation as basically another way of thinking, rather than some deep, monk-like "practice." I've only done one week so far. And I may
Post a Comment
Read more
More posts