Showing posts from April, 2016
Show all

April 28, 2016
Last night, I had to tell Beatrix that, due to a 100K+ budget cut to her school, they were cutting music. Her immediate response was that the kids should stage a protest to keep it. I love the idea of her standing in the music room with her violin, refusing to stop playing until they reinstated music. But as much as I admire this feistiness, my hear is sick that music got cut. I'm not blaming her teachers or her principal. They were faced with a ridiculous situation; the principal received the budget information late last Sunday, a major piece has changed every day, and it is due back to the District tomorrow, with no exceptions. The district is facing a 15.1 million dollar shortfall, though I am compelled to point out that a large part of that is due to reduced enrollment (people leaving because they can't put up with SPPS any more), and some (in my mind, major) mis-management of facilities, retirement incentives, and free/reduced lunch eligibility. But all that aside, when
Post a Comment
Read more

A Trip to The Little Paris Bookshop

As I've mentioned before, we're going to Paris for our 10th anniversary this June. I'm thus on a tear on books about Paris, and I was excited to see this come up on Blogging for Books . But, sadly enough, except for the first few chapters, it's not a book about Paris, or it's quaintness, or even so much about "...a literary apothecary [who] from his floating bookstore in a barge on the Seine...prescribes novels for the hardships of life." (from the book jacket) But that's not really the story. It's more of a journey story, about the trip down the Seine that that man takes when he finally reads a long-sealed letter from his long-lost love, and the people (and cats) who join him on the way. I never got a really good sense of those people, so I did not come to care about them or the changes that ensued. I got a slightly better sense of place for the journey down the Seine, but even that was transient. And unfortunately, the book that plays the s
Post a Comment
Read more

April 18, 2016
Tonight, the Knight Foundation  had a lovely little happy hour event for grantees. I was talking to someone about how much I loved my clients,and she asked why. Here are just a few of the reasons and things they are up to. I love my clients because: -   Nautilus did an amazing production of The Fantasticks that I saw last night and I am still immersed in (it's sold out for the rest of the run, but they *may* add performances next weekend — don't miss it if they do!) -   SEIU and Minnesotans for a Fair Economy have been kicking it in terms of lobbying for better job conditions, paid sick and safe leave, and higher wages. (The fast food strike last week was just one example). -  I got to attend an incredible TV Takeover at TPT by Circus Juventas on Saturday night (and the spring shows come up in just a few weeks, get tickets now!) So proud of the amazing circus world they create. -   KidsPark and C athedral Hill Montessori make the world better for kids every single da
Post a Comment
Read more 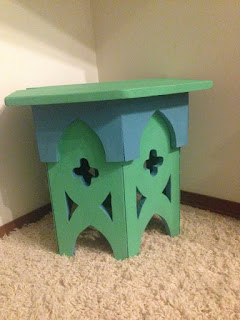 So, for a long time I have been wanting to experiment with chalk paint. I like the idea of not having to do a lot of surface prep, and when I walk into stores that feature furniture with it, they have so many cute things! So finally I took the plunge and bought some paint at Belle Junque . It took me long enough to try it out on anything, but hey, the store is a one-weekend-a-month store, so it fits the theme! I finally used it on an old wood table I had acquired years ago when the building where Punchinello Players had been at the U of M was torn down. The table had been sitting around unused for years, so I thought it was the perfect first project. And here it is! It's not perfect; I had to get used to the paint texture, and maybe should not have picked two tones so close in color saturation. It looks a little like a Dumbo stool, but I think that's just inherent to the piece, no matter what. But all in all I am pretty happy with it; it was fun to do, and I look forward
Post a Comment
Read more

I just got back from a beachy spring break, in which I was able to read 5 books in my 6 days gone. So it was pretty much perfect! I mostly read on my kindle now, but brought along a paperback copy of Bradstreet Gate (which I received from Blogging for Books in exchange for this review). I am a sucker for a good academic mystery, and the marketing for the book compared it to Donna Tartt's Secret History (one of the best books ever) and Meg Wolitzer's The Interestings . While those are pretty high bars to hit, I was hoping it would at least be as good as the similarly themed Black Chalk , which I moderately enjoyed. No such luck. The author ( Robin Kirman)  is a new writer, and this is her debut. A few parts of it were exceedingly well written, full paragraphs that described emotions or feeling so well that they seemed to be part of a separate book altogether. But in general, this was a book about people we did not care about (the leads — Charlie, Georgia, and Alice, plus
Post a Comment
Read more
More posts