Showing posts from May, 2013
Show all

May 31, 2013
The long winter and wet spring has really done a number on all three of the gardens I tend. At Summit, the Great Pool Disaster ( TM ) had the biggest impact (short version - big tree branch fell on pool and ripped apart the cover plus caved in the poorly-laid bluestone, thus causing a multi-faceted repair plan and over 20K worth of work needed). That work has only drawn attention however to the remarkably terrible job the landscaping company did just 7 years ago, however (hint, if you want landscaping done, DON'T use Landscape Renovations!!), and I have spend much of the spring ripping out dead plants and getting really bummed out over poorly designed/planted beds. It needs some major redesign and replanting, especially since we are hosting the SARPA tea, but I just don't know that we can afford that with the other work going on. Winter Street is...well, Winter Street. We planted a new tree. Here at Ashland, we are preparing to install a raised bed garden in back to grow
Post a Comment
Read more 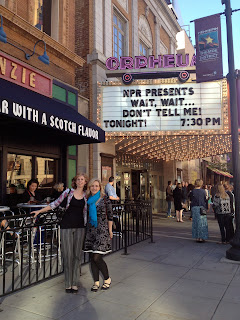 So, last week I was able to cross off a long-standing item on my bucket list and go see "Wait Wait Don't Tell Me" recorded live. But it gets better — the amazing John Moe introduced the show! And better — in a reception afterwards (more on that later), I got to see the lovely Joanna Schnedler, and hear my former classmate Dave Kansas (now the COO of American Public Media) speak, and meet his lovely and impressive wife Monica! And even better — I got to attend with Jennifer and Elaine, the two best friends a girl could have, and the perfect companions to girls night out! (plus chauffeur service by a handsome man!) And better still — my college friend Adam was one of the panelists, and so we got to catch up ever so slightly. Adam is an amazing and talented human being that I feel lucky to call a friend. But most amazingly, Peter Sagal hosted the entire thing having experienced a brutal fall earlier that day, with an eye swollen shut and likely in an incredible amo
Post a Comment
Read more 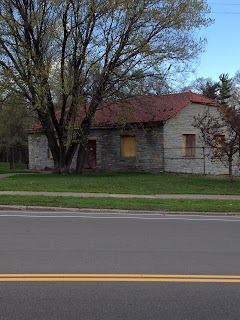 Another preservation goal — I suppose that's appropriate, since May is Preservation Month! This building, and another one like it, sit over in Highland Park; this one is on the corner of Hamline and Montreal, right by a frisbee golf course that has sprung up and across from a city-owned golf course and from Circus Juventas . I believe it's designed by Cap Wigington , if I remember correctly. What you can't see from the picture is that it is two-story, built into a hillside, and with a lovely patio spreading out beneath it. It's city-owned, and it's been boarded up as long as I can remember. To their credit, they have not demolished it, simply moth-balled it.  The rationale I keep on hearing about it is "we can't do anything with it because it's historic," which makes no sense, because it's the history that makes it so beautiful. I have heard recently that they are looking for a public-private partnership to develop it, which is a good
1 comment
Read more

According to the City of Saint Paul, This House is a Threat 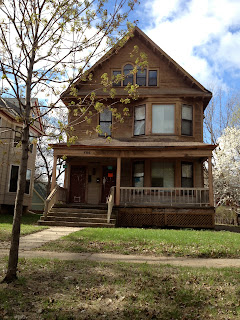 Scarey, huh? This is a turn-of-the-century home in my neighborhood, currently a duplex, just steps from a park and on a quiet, one-block stretch of Iglehart. The block has some beautiful homes, and is an original part of the Historic Hill District, the city's first historic district established in 1976.  It was moved into the lot in the 1980s, when a new housing complex was built across the street, so has new mechanicals and a new foundation. I haven't been in it, nor has anyone I know, but the reports I have seen show damage but not insurmountable issues. It's the kind of home that dozens of people I know would love to move into. According to the City of Saint Paul, this house is a major threat to public safety and must be razed immediately. Yes, the city (including some neighbors, my councilmember, licensing, and various other city officials) considers this empty house not an opportunity, but a major threat to the community. Yes, more of a threat than the weekly b
14 comments
Read more

May 13, 2013
Two summers ago, we were in New York state when their legislature passed gay marriage. I remember sitting on the couch, looking out over one of the Finger Lakes, when the radio announced it — and almost immediately, in the just clearing sky, two rainbows arched across the lake. It was magical. I feel that way today. After years of not understanding why my state seemed to have abandoned its progressive past, after the last two years of a divisive and mean-spirited constitutional amendment debate, and after I have seen my gay and lesbian friends consistently encounter discrimination at every turn, I feel like we have turned a corner. I wasn't alive (or at least old enough to be aware) of the civil rights struggles in the past. But I can feel proud to have been part of this one. To Beatrix, people fall in love and get married, and it doesn't matter to whom. To her, our friends Mr. Bob and Mr. Jan are just as married as her uncle Robert and aunt Janet, and we have never said an
Post a Comment
Read more

May 03, 2013
It's a big joke that Minnesotans spend all their time talking (complaining) about the weather. It would be a bigger joke if it wasn't true. But this year — it's especially bad. It's May 3 and it is snowing. Enough to stick on the ground. And it is cold and gray. And I am just so over it. We need spring. Spring is a reset button for your life. Whatever bad habits you got into all winter, it's time to shed them in the spring. Time for a whole new start on your goals and your existence in general. Time for green and growing and baby animals and evenings spent outdoors and open windows and seeing the neighbors who have been shut in their homes for months. Instead, we have this neverendingwinter. Everything is a slog. Every day my neck and shoulder hurts. Every day I work frantically to keep up with work and create absolutely nothing new. Every day I walk through the back door at the end of the day and am greeted with a tower of dirty dishes that have amassed there
Post a Comment
Read more
More posts