Showing posts from July, 2013
Show all

May You Lead a Pinteresting Life

July 27, 2013
There's been a lot of discussion lately about how social media is not quite accurate in how it portrays people's lives. The general thesis makes sense. Especially on places like Facebook and Pinterest and boutique blogs, we see people's accomplishments; with women and the "New Domesticity"movement, we especially see some rather intimidating creative projects. You know what I mean: - "Check out the new curtains I made out of my grandmother's wedding dress" - "Here's a picture of the 18 kinds of varied jams and jellies I made today" - "Here's the entirely new organic cotton wardrobe I sewed for my daughter for back to school" - "A picture of our dinner — fresh baked bread and goat cheese I made from our neighbor's new goat Daisy" -  "Our perfect vacation retreat in the mountains of Costa Rica" These posts are always beautiful, and inspiring, and kind of intimidating. I know this for a fact, b
1 comment
Read more

July 18, 2013
Minne*  is one of my newest clients. A nicer bunch of folks you would never get to meet, but I had never been to any of their events, since usually I have stayed home to kid-wrangle while Patrick does the tech thing. So tonight, we switched roles so I could go to MinneDemo. It was easy enough for me to find; it was held at the old Jeune Lune space, now called "Aria at the Jeune Lune." Basically, I drove there on auto-pilot. Arrived, parked easily, walked through the door like I had a hundred times before — until I stopped in my tracks. You see, it was the first time I had been there since it was no longer Jeune Lune. I enjoyed the event, I really did. I could not have been prouder of the Minne* team.I met some fascinating people. The demos were great, and I wish I could have stayed for all of them (bedtime duty called). But really, that was ok. By the time I left, I was actually totally freaked out from being in the space. They have made some changes (like they likely p
Post a Comment
Read more 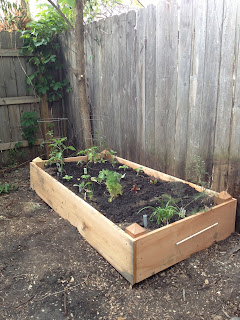 This was our new garden area when we planted it back at the beginning of June: Now it's grown quite a lot (though we still need to cut down that stupid tree!) The raised bed is almost solid green. Beatrix's small flower bed also looks great, but needs to be thinned. The tomato tree is verdant, though no tomatoes yet. The lettuce in the gutters turned out to be a dismal failure, at least so far. Even with all the rain we have been having, the gutters dry out, and so it's all dried up (especially the top one, which I can't reach to water). All in all, though, pretty good. I'll try to update with some current pictures soon (though I should weed first).
1 comment
Read more 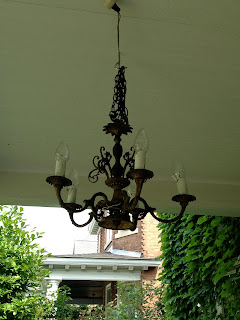 It was a long, lovely weekend, full of relaxation, and some projects as well. We got a few niggling things taken care of at Summit.... After several years, we finally achieved my dream of a chandelier on the front porch: I started the first phase of bathroom renovation, painting the ceiling tea green: And we installed a gazebo on the back deck, for some shade while eating: We also did several things we did not take pictures of: measured the windows for curtains and the bar for a new top, tried to figure out some appliances/electronics that no longer work, mowed, laid some sod, went furniture shopping, ordered some new lights for the kitchen...
Post a Comment
Read more
More posts