Showing posts from May, 2012
Show all

May 31, 2012
I'll admit that I am hard on knives. I've reformed from bad habits like using them as substitute screwdrivers and putting them in the dishwasher, but I don't sharpen them with any regularity and my knife-use skills are likely sub-par. The 7" Wusthof Santoku knife is my most-used item, if only because I can be reasonably sure it's appropriate for most uses. So I was a little bummed out when it got a large chip at the end of the handle, right above the rivet. Our 6th anniversary is coming up, for which the "modern" gift is "iron," so I decided to get Patrick a new one. Yesterday, I headed over to Eversharp  knives in NE Minneapolis. I walked in with the old knife so I could compare. The nice young lady who came out to help me walked over, took one look at my knife, and grabbed a shiny new one, presenting it to me free of charge, although I don't think I had purchased the original knife there. "We want to be sure you're happy with
1 comment
Read more 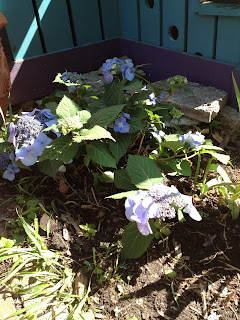 From my gardening posts lately, you can see what's on my mind. Today I broke down and bought myself a somewhat expensive plant. I've always wanted hydrangeas by the front steps. First I wanted tree hydrangeas, but they are expensive. Then, when the Endless Summer varieties first came out, I wanted those, but now I have them at Summit and they are kind of underwhelming. Eventually, I did have a small white hydrangea there, that Dale Bachman gave me as a thank you for hosting his daughter's wedding at Jeune Lune. That hydrangea lasted for years and made me very happy, but this spring it just did not come up. I don't know if it was the lack of snow cover, or the work on the porch, but it was just gone. So I dithered for awhile, and priced them out at several stores, and tried to see if I could move something else into the place, and then I finally gave up, went to Frattalone's today with a coupon, and bought the Twist and Shout hydrangea that I wanted. I car
Post a Comment
Read more

How Does Your Garden Grow?

May 13, 2012
We (generally) have a front garden in! Yay! As you likely know, there's a backstory that involves expensive sewer work that ripped up our front yard, and a husband with broken toes who could not help as much as he wanted, but the short of it is that — hooray! We finally finished getting the garden in today! We had to re-dig the front beds and replace the dirt, then lay the stones in front and put the short metal fencing back in. We also had to rebuild some of the mounded garden on the side (which is kind of grave-like), and dig out where the dirt had covered the herb garden. Some shrubs did not make it and had to be dug out, and we needed all new plants, though we did salvage a few of the heirloom peony roots from my mom's house. The plants were the worst, since we've spent so many years collecting them from friends, buying special ones, and building cohesion — and after the work, we just could not afford to go out and buy new ones. As I said, though, the peonies won&#
Post a Comment
Read more

Two very different shows in two nights. Last night I went to the opening of THE WAR WITHIN/ALL'S FAIR, by The MovingCompany. The company's model for this kind of show is to develop the work at colleges and universities, and then bring it to full production soon after. This show was first workshopped at the U of M last fall, and it has several of the original U students in it, plus company member Nathan Keepers and local faves Jon Ferguson and Suzanne Warmanen. In other words, the cast rules. The Twin Cities has a lot of great theatre, but this is the kind of show that has been missing from the scene for a long time — wakka-wakka physical humor mixed with a bit of absurdist thoughtfulness. I've seen a few shows lately that have incorporated the kind of joyful physicality I saw last night (Live Action Set's SEVEN SHOT SYMPHONY comes to mind), but nothing quite as fun (and funny). It's the kind of show you've been missing, even if you didn't know you
Post a Comment
Read more 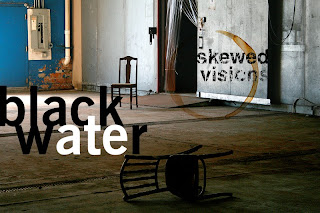 I was lucky enough to attend the first performance of BLACK WATER last night, and I am still thinking about it. This is the first "full-scale production" Skewed Visions has put together in three years, and it was worth the wait. Charles has been working on the idea for a long time, but it took a lot of effort to get the site (the old Mediterranean market on University Avenue) and the additional performers (Laurie van Wieren and Megan Mayer) all put together. Permitting and other logistics have been especially challenging. Still, I can't imagine the piece in any other way. As in many site-specific pieces, you stand and follow the action — pausing to watch scenes (sometimes walking around and examining them as they occur), and so you are carried through the building and out onto University Avenue. It's also a short piece — well under an hour. It leaves you wanting more, more of the performances, more of the ideas, more of the experience (more wine?). It's a do
1 comment
Read more

May 07, 2012
I don't usually post "cute things that Beatrix says." But yesterday was kind of a motherlode... In the morning, while cuddling: "You're the cutest mommy. And I'm the cutest girl, like a baby raindrop." In the afternoon, when she didn't want to take a nap: "My choices are watch a show or don't take a nap. Those are my choices!" Later, regarding the same show: "Don't boss my around! If you boss me, I'm not staying here!" "Where are you going to go then?" "Nowhere!" At night, when going to bed, while squishing Patrick's face: "You're a whoopee face!" "A whoopee face?" "Yes, like a whoopee cushion you sit on."
Post a Comment
Read more
More posts