Showing posts from February, 2008
Show all

February 29, 2008
What really sucks, when you are 3 weeks old: The fact that you like to move your hands around and put them in your mouth, but they just Do Not provide milk, much as you want them to, and you have to rely on the damn boob. This apparently especially sucks between 3-6 am, continuously.
Post a Comment
Read more

February 28, 2008
Miss Beatrix was on rather a wacky sleep schedule last night — I was up with her from 3-5am, and then Patrick took over until past 6. Thus, we were both a bit foggy today, though we managed to get a few things done; Patrick in particular ran several errands and prepped the South St. Paul house for some showings today. Tonight, though, we hunkered down with ice cream and "The Tudors" — nice to be comfy at home and all together as big snowflakes fell outside. Speaking of ice cream, have you seen the new Ben & Jerry's flavors? I am not sure which I will like best, cheesecake brownie or cake batter, but am looking forward to the taste test!
Post a Comment
Read more

We Really Do Have the Best Friends in the World

February 24, 2008
One of the more humbling aspects of bringing our daughter into the world has been the support and generosity of our wonderful friends Just a sampling: - The TC-Alts "Hotdish Brigade," who have ensured that we have stayed well-fed, as well as giving great advice and keeping me entertained and sane while on bedrest. You guys are the best. I mean it. - All the others who have brought us food — from mac and cheese to quiches to chicken rotel to chili to chocolate and more; we've never eaten so well. - Friends from across the world and around the country who have sent adorable clothes and toys. The mail has been so fun to collect every day! - People who have helped us out with work, housework, errands, and a plethora of tasks. - Local friends who have stopped by to see us and meet our daughter — you've brought generous and lovely gifts, but most importantly, you've brought yourselves and your love into our daughter's life. - Cards, calls, emails and IM
Post a Comment
Read more

February 21, 2008
Getting used to days of being slightly tired and foggy, hanging out, and loving our daughter.
Post a Comment
Read more

February 14, 2008
Longer spaces between posts may become the norm for awhile... We are on an every 2 hour feeding schedule to bulk Ms. Beatrix up, so there isn't much time for anything else between, and I've been told to rest more. Nonetheless, we are generally all in good shape, and despite tiredness I feel lucky to be where we are. Patrick has been doing a great job of keeping up Team Trixie, so head on over for his fanciful musings as to what she might be thinking...
Post a Comment
Read more

Beatrix is here! Born on the 9th at 8:41am. More update here later but make sure to check Team Trixie for the full details, pictures and more.
3 comments
Read more

February 06, 2008
Thinking back, last night gets more and more exciting. By the time Patrick got to vote, they were out of ballots and he had to write on a post-it note. Minnesota had almost 200,000 Dems turn out to caucus — the previous record was 80,000 in either 1968 or 1972 depending on how you count, but I guess THAT doesn't matter any more! Just to put that in perspective, Dem turnout in the Iowa caucuses were 236,000. Our site (Ramsey Junior High) was cited as one of the craziest sites; we're a very active neighborhood and I don't think recent redistricting helped in that chaos. True, there was no way that anyone was prepared for that onslaught. But I would so much rather have it that way than the other way around. Maybe, just maybe, there is enough energy in this country to not only elect a president who can turn us around, but then stay involved in the process long enough to support that and make it happen. I want that change so badly, not only for myself but so much for Ma
Post a Comment
Read more

February 06, 2008
So with bedrest and the impending baby, we finally joined the rest of the 20th century and joined Netflix. We got our first movie today (The Illusionist) and are now ready to send it back and move down the cue. Kind of ingenious, though the site crawls for us for some reason -- takes forever to add movies. Not sure why -- our machines? Our router? We also caucused tonight. INSANE. Summit and Grand were backed up for over a mile heading to Ramsey Jr. High. Patrick dropped me off at the huge line, but I got into the building before he parked and got to me -- and there was no cell phone service inside the building. I struggled down to the room, getting completely jostled; I just do not look 39 weeks pregnant and it was so packed no one could see anyway. Plus I was supposed to be in bed. Plus none of the volunteers really knew where anything was, and our neighborhood recently got redistricted so they got a whole lot of new, active people (and a really small room to put us in)
Post a Comment
Read more 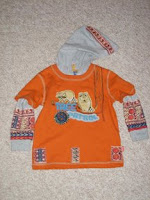 I am part of a children's upcycled clothing crafty exchange through my on-line board. My plans had to change, some, since I had not started my item yet, and ended up having to hand-sew it in bed, but here it is. It's inspired by the book "Leo the Late Bloomer," which the other mother (omg, that's quite a phrase, isn't it?) and I both love. Yet-to-be-born Beatrix and I got our item yesterday, an adorable jumper with the spoon-bridge-and-cherry painted on it and matching babylegs. Turns out my exchanger and I have actually met, when she lived here and worked in theater! Patrick went to the Obama rally yesterday and was very inspired. Even without bedrest I don't think I could have handled the lines and crowds, but I am glad he got a chance. I will note that we have gotten 3 Obama calls encouraging us to caucus, but Hilary has yet to chat us up. Went to a great neighborhood Superbowl party tonight. I figure it still counts as bedrest because I spent all
Post a Comment
Read more 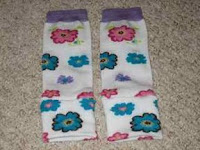 I can hand-sew while in bed, so I made a pair of Babylegs.
1 comment
Read more

February 01, 2008
Bleahh. Pregnancy-Induced Hypertension, so bedrest for the next couple of weeks. So much for getting things done.
1 comment
Read more
More posts