Showing posts from June, 2015
Show all

June 29, 2015
In a lot of ways, June was a total fail. I participated in two online challenges — both about forms of personal growth — and came nowhere near my goals in either. One of my New Year's Resolutions was to really partake in living in Minnesota — which to me meant especially participating in festivals and events — and this weekend I missed both Pride and Jazz Fest. I have a plethora of house and garden projects to do, all of which are totally stalled and causing me no end of stress. The City of Saint Paul has free yoga in the park classes and I have not gone. I created nothing. I have not designed Inspiring Summer Learning Activities for my daughter. I have not even succeeded in a super-modest goal of spending an hour a week reading in a coffeeshop. It's been a month of administrivia. It hasn't been a total waste; I made shrub for the first time, I managed to send off our contribution to the DFL before the state eliminates the reimbursement (you only have through tomorrow!),
Post a Comment
Read more

It's Not About the Flag

June 24, 2015
Because it's really not. A confederate flag is a symbol. True, there is no reason on earth it should be flying above a government building. But a glad is a simple thing that could (and should) be taken down. It's the equivalent of putting a band-aid on a toddler's scratch. It makes the situation seem better, but it does not in itself affect change. What we need to do it to have honest, and real, and painful discussions about race, and the racial divide, in this country. We have to stop hate groups from profiting from their venom, and inciting others to join them. We have to fight the demon of poverty in this, the richest country in the world, which heightens racial issues. We have to teach people that violence is never the answer, or even an option. We have to demand responsible gun ownership in this country, so that no one ever gives an obviously disturbed young man a gun for his 21st birthday. We need to strengthen — no, we need to completely reinvent — mental health a
Post a Comment
Read more

June 15, 2015
Nine years ago tonight, in a candlelit ceremony at the old Nautilus Music-Theater space, I said "I do" to Patrick Rhone. Nine is not ten, or the big anniversary years of 25 or 50. For nine years, the traditional gift is pottery or willow, which seems rather an afterthought. We even had trouble getting together our plans to celebrate tonight. But nine is very, very big in a lot of ways. My parents marriage lasted nine years. In my first marriage, we separated a few months before our ninth anniversary. So in this case in particular, I think that nine is pretty important. Happy anniversary, honey! It;'s been a long and crazy nine years, but amazing ones too!
1 comment
Read more

Things I Suck at That I Did Anyway 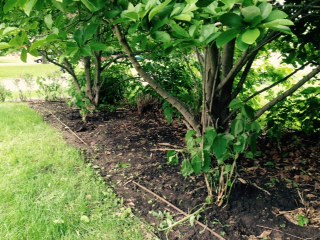 (of course, you are thinking that I can't possibly suck at anything, right?) Just about 9 years ago my mom did a massive landscaping project at the Summit house. Pretty much every day I curse those landscapers (message me if you want to know who NOT to use!) for their maintenance-labor-intensive, strangely planned design. The ne bright spot is the row of magnolias in the front yard, and for 1 week each year when they are in bloom we have the prettiest house on Summit. But underneath was a wild overgrown forest, so earlier this week we hired a fantastic husband-and-wide pair to clean it out. But that left the hydrangea dividing and replanting to me. And here's the thing; much as I figuratively dig myself into holes all the time, I super-suck at it in real life. I lack the strength to dig a deep hole, and the footwear to push down hard on the shovel. I always pick the spot with the most roots and usually some giant rock buried about 8" down. I dig, and then I go in wit
Post a Comment
Read more 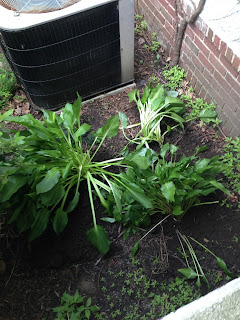 If you know my gardening proclivities at all, you know that I hate hosta. I have always sworn not to have them in my garden, disparaged them as "hostages," and the like. But… There's a muddy spot at the Summit house by the porch, where it's super-shady and nothing will grow. It's generally hidden, but you can see it while sitting on the porch. So today I collected some free hosta from a neighborhood board, and relocated them there. They don't actually look too bad — better than the dirt at least! I also planted a climbing rose (also free from the neighborhood board), and over the weekend, we planted a fewcheery geraniums (NOT free!) in the front planters. The match the new porch furniture nicely. One thing I have to do is to figure out what to do with the beds that surround the porch. I think the landscapers were under the influence of something when they designed them. The yews are out of control, and then in front of them is catmint, with spirea
Post a Comment
Read more
More posts