Showing posts from January, 2019
Show all

January 27, 2019
Rent is an ingrained part of me. I remember when it opened, when there was all kinds of buzz about "WHAT is this show?" I saw the original cast, with my friend Kristen in it, even before she moved up to play Maureen. I've probably seen it, including the live and movie versions, over 20 times, and the lyrics have blocked out enough of my brain space that I'll probably never perfectly do the journal entry to release TRNA correctly the first time, but I can spout every word of La Vie Boheme . And I've brought up a daughter who feels the same way, and who has seen the movie and a live production. And who puts up with me every time I explain to her what the AIDS epidemic was like, or how much it meant to have a trans character like Angel as a lead, or even what it means to have a cast of a musical that were POC and just people, nor in specific roles like Porgy and Bess . She's been to New York a few times, but trying to describe NYC in the 1990s is probably stil
Post a Comment
Read more 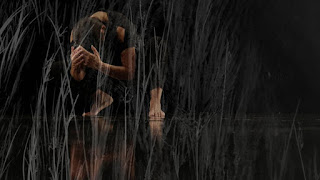 Photo by Imranda Ward. Image by Rosy Simas. McKnight Fellowships/MANCC Residency 2018. From the Weave website (referenced below). This is not a "review" per se , because unless you are heading to Alabama, or Hawaii, or Philadelphia, or DC soon, you had one chance to see Weave here, and that was on January 12 (but, judging by the number of people I knew that I saw there, you might indeed have been there.) It's much more a commentary. I've known Rosy for a long time, and every now and then I'm lucky enough to be able to help her out by reading over a grant or running some financials for her, which makes me feel like I am doing the tiniest bit to help her have time and space to create. But I have to admit that it gave me a real chill along my spine to stand in the back of the Ordway lobby and have one of the panelists in the pre-show discussion talk about "Rosy's style" and "body of work." Because she's gotten to the place where bot
Post a Comment
Read more

Guest Post Link - On Enrollment on the Randolph Heights Page

January 12, 2019
I've been busy blogging today. This is what I put on my daughter's school's page about why enrollment is important, even if you think class sizes are too big
Post a Comment
Read more 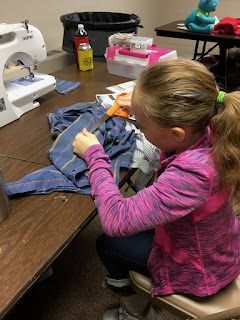 When my father was dying, I worked hard to get him into Our Lady of Peace Hospice , because I knew it would be the right final place for him to be. That's been the right choice for so many reasons, including the fact that they check in with you in the months after your loved one's death to see how you're doing. Today, Beatrix and I attending a teddy bear workshop, where we were able to make a bear from my dad's old shirts. The whole experience was great. Kathy and Diane, the volunteer seamstresses that were assigned to us, were very sweet (and also fast!) They guided the work, but we were able to add our own touches, like writing a note on a  little wooden heart we enclosed inside the bear. We picked a few of my dad's favorite shirts, so we have greta memories of him wearing them. Thanks to our speedy seamstresses, the workshop took about half the time scheduled, and gave us a really good chance to talk about my dad and why we were making the bear in his memory.
Post a Comment
Read more

January 08, 2019
When Beatrix was a baby she simply Would.Not.Sleep. We're not talking the run-of-the-mill waking up at night; I mean she would wake up 8-12 times a night. She was so tiny and grew so slowly that the doctors advised us that we really had to get up and feed her and not just let her cry it out, or it could be extremely dangerous for her. I remember nights when I dreaded going to bed, because I knew I would just be waking up soon again and didn't think I could bear it. She did grow out of that by first grade or so.... Lately, I've not been sleeping. Not to that point, but since my dad was sick this summer I've been having a hard time sleeping through the night. I wake up consumed with worry and dread about things I've forgotten, the future of our country, client needs, my family, the cat's snoring. I don't know how to start to sleep again, but I feel like I am losing brain cells at an extremely rapid pace.
Post a Comment
Read more

January 01, 2019
I had all kinds of great resolution ideas for 2019. For instance — use more spices! We have a great drawer full of delicious spices; it would be great to make more interesting meals with them. Patrick has a resolution to go back to some of our favorite recipes and look through cookbooks for new ones, and we both want to resolve to go back to having monthly dinner parties, so this was a great one. I had also wanted to learn to make a couple of standard but excellent cocktails. A couple years back we had a resolution to use gift cards, which was an excellent one. the problem is they have multiplied again, so that was another thing on my mind. That will avoid bad situations like having $150 in gift cards to Heydey that were lost when the place never re-opened.... Then there's my new motto: "Always take the selfie!" When going through pictures for my dad's memorial, I realized there were few pictures of him, mainly of other things. So I've been trying to memor
Post a Comment
Read more
More posts