Showing posts from October, 2014
Show all

October 19, 2014
As a born and bred Saint Paulite (with some time away to appreciate it!), I would say that I know the city pretty well. And I am pretty solid on most Minneapolis neighborhoods as well, aseptically after my time working for the Neighborhood Revitalization Project. (now, if you get into Maple Grove or something I'm lots, don't even ask me to go there). But lately, I've been getting more familiar with neighborhoods I knew only fleetingly before, and it has been fascinating. This summer, I started to get involved with several neighborhood Facebook groups. Hamline-Midway, just to the north of us, has several interesting groups — a neighborhood one, a Buy/Sell/Trade Group, a craft group, a foodie group, and even a preservation one devoted to saving the historic homes around Hamline University. As such, I have gotten to know several people in that neighborhood, and driven around it a lot picking things up, and also checking out such gems as Burning Brothers Brewing . It's
Post a Comment
Read more

October 13, 2014
One of the things I love so much to see if people restocking Little Free Libraries. Today, as I was coming home from taking Beatrix to school, I saw a man with a backpack restocking the one at the end of our street. Someone just filled ours up with some great novels, too, so head on over! I have a small stack of books here at home from people who have given me library items. i also have, thanks to my friend Katherine's generosity, a new kindle, plus a back-up. People who love books are awesome!
Post a Comment
Read more 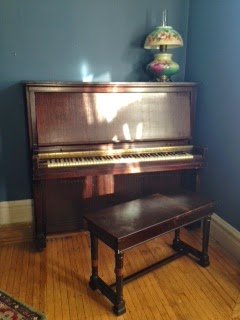 Beatrix has taken violin for a little over a year, but this year she added piano through weekly "Project Cheer" lessons near us. So it seemed time to get a piano, and so yesterday we got this. It was given to us, and seems to fit our space perfectly. I am reminded that the original owner of our home, Sarah Chapin, had a daughter who also lived in the house and taught piano. After it was delivered, we headed off the the Art Crawl, which included taking in a performance at Nautilus Music Theater, going through many studios in the Northern Warehouse, and seeing a few minutes of "Arrivals and Departures" projected on the Union Depot by Motionpoems. Wonderful, art-filled night!
1 comment
Read more 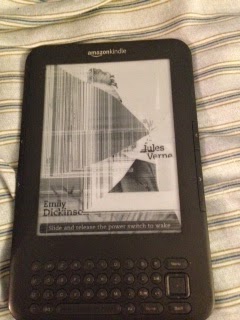 We may think that much of our life can get handled in a global way, with online resources. But a couple of things in the last day have proved that wrong, at least for me. On September 30, thanks to a coupon code from a friend, I decided to try out Gwynnie Bee  (basically, a clothing rental place, you pay a monthly fee and they send you outfits which you can either wear and return or buy). I have to say, I am not impressed. The selection is not great; what's more, I am on the low end of the size range, and often things I want are unavailable. Clothes that are in banner pics are not actually available. It took over a week (or a 4 week trial period) to get my first outfit — and what a disappointment that was! It reeked of dry cleaning fluids, I put it on and immediately took it off — it looked terrible. (I replaced it with a maxi skirt, tee shirt, and cardigan for a much-more-casual-than-planned outfit, and still looked 100x better). I have another couple of weeks on the membership
1 comment
Read more

October 05, 2014
I've been quiet lately. For a lot of people, including my husband, fall is their favorite time of the year, but not so for me. I find it hard to let go of the waning days of summer and to make the transition to the cold. This year is especially hard. We put our dog Geronimo to sleep a week ago today, after a rapid decline in his 15-year-old health. I've been contemplating a post on him, but it's just too hard; the house already seems so empty, and that might make it worse. Beatrix has started first grade, and is doing fine but nothing exciting to report. I am working a lot, and I am pleased with what I am doing, but nothing seems momentous. Patrick is working hard on research for a book. Our life seems taken up with a lot of small issues that take a lot of energy to resolve, and are not particularly rewarding once completed. To top it all off at this particular moment, I can't shake a migraine. I remind myself that every field needs a fallow period, and that this
Post a Comment
Read more
More posts