A Picture is Worth a Thousand Words

September 07, 2013
So, in trying to be more creative, I've been exploring with more classes. recently, thanks to a Living Social deal, I purchased a Wine and Canvas session....

I picked the session I did because it featured a painting called "Starry Night Over Saint Paul," which reminded me of the night Patrick and I spent at the Covington Inn for our anniversary last year. I found out after I booked that it was the opening weekend for their new space (before now, each night was set up in a restaurant, which I would imagine could get kind of tricky). The space they have now, in St. Anthony, is well set up and has a nice bar and food selection: 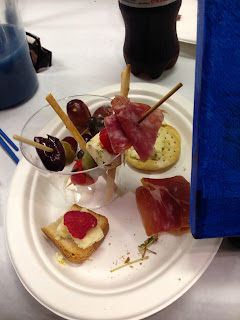 So you get there, and they set you up with all the stuff. Nothing as intimidating as a blank canvas, right? 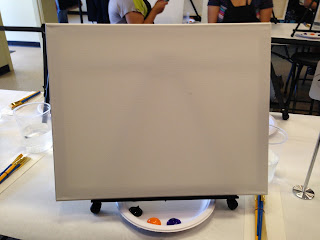 The crowd was mixed. Predominantly female, though a few couples on dates which looked like fun. A few people on their own like me, but mostly small groups of friends. The trio across from me was a group of nurses on a girls night out.

We spent quite some time painting in the background of the canvas, and outlining the skyline, then setting the base. Then we took kind of a long break (more wine!). 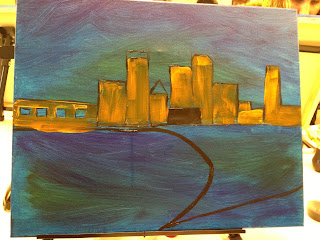 Up to this point, I was feeling pretty confident. It was looking like it was supposed to, and we had plenty of time.

The instructor was very chipper, and in the beginning, easy to follow. She did have a habit, though, of forgetting to tell us to do something, and then we had to add it in in the fly, along the lines of "Oh, I forgot you to put THAT building in? Well, ok, just dry off your brush and paint in an orange box here, it's ok if it mixes with the blue."

Then we took a long-ish break, which I think was mainly to let the paint dry. When we got back to it, it got a lot harder. There was a lot of detail to get in, and the instructor moved pretty fast, likely to get it all done in the allotted time. The room is kind of big, and it wash't always easy to see what she was doing; plus, I think it's a little too easy if you are an artist to be like "Ok, put some little dabs of yellow in here, ok, move on to some little dabs of white like this, ok, now use a larger brush for several long lines, of black, ok, now mix yellow and white and shade in here..."

I wasn't the only one confused, and time seemed to race at the end! Plus, it's hard when you are all painting the same thing — you look around the room and are like "Oh, wait, I really like THAT one, why can't mine look that good?" Plus it's kind of disheartening to get pretty far and then feel like you blew it in one section.

In the end, I'm kind of mixed. I was not very happy with the way mine turned out, but Patrick likes it, and I made it for him. If you kind of squint it looks better: 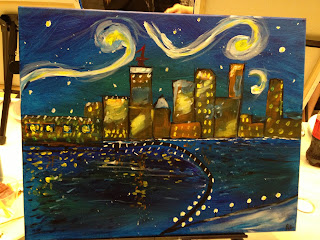 Ultimately, I'm glad I did it, and it did feel really good to create something. I'm not exactly a big threat to Van Gogh though!