September 12, 2013
It's been a hard several weeks with a lot of issues going on. But I knew it had been even harder than I realized when I found myself with a need to be in the kitchen tonight. Creating things usually gets me out of a funk, and cooking/baking/preserving is the ultimate in that for me — I can escape to my own world of thought while doings something beneficial for my family.

So, as the time was measured by the passage of shows on MPR, I settled in. I started by pickling (for the first time ever), converting beautiful lemon cucumbers my friend Maggie gave me into 6 jars of golden pickles. 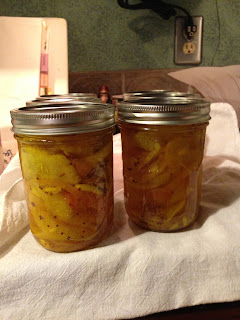 As that boiled down, and then soaked in the water bath, I mixed up brownies to use as a base for trifle for a dinner party tomorrow night. Since the oven was already warm and the freezer overly full, I defrosted some bananas and made banana bread (we always toss our bananas in the freezer when they inadvertently become overripe, for this very reason).

By the time Patrick got home from taking out recycling at Summit, the kitchen was full of sweet and spicy smells and the washer was humming with laundry. He brought me some mint, so I cooked that down into a simple syrup to freeze in ice cube trays, so fall and winter mojitos can remind me of the warmth of summer.

And, two and a half hours later, I'm finally in a new mindspace and can actually get some work done.