Me Versus the Lice 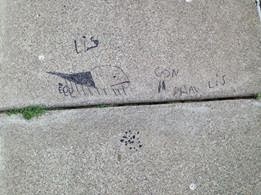 We got the first lice notice in the fall, an email from one of the moms in Beatrix's Girl Scout troop. "I'm really sorry, but we just discovered ________ has lice, you might want to get checked." They must have discussed it at school, because all of a sudden the kids were putting their coats and backpacks in lice bags in the coatroom, and Beatrix was asking me to periodically check her.

But we skated all the way through the school year with no problems. I've never actually encountered a louse (well, maybe on some dates I've been on), so I was not sure exactly what I was looking for anyway.

Then, on Sunday afternoon, we were taking a Father's Day rode on the Green Line, and I looked over at Beatrix asleep on Patrick's lap. And suddenly, I know exactly what they looked like. Because there were a lot of them in her hair.

We went home, we used lice medication, we combed out her hair again and again, and checked each other. Patrick had nothing. I had a little zoo to rival Beatrix's. (they have flea circuses, why not louse circuses?) We continued treating, washed everything in both houses in super-hot water, froze my hairbrush, and actually melted some of Beatrix's by putting it in the microwave. We combed and combed and combed. My friend Amy came over with her super-comb and went through my hair. We emailed everyone we had been near to tell them to check. But we still could not seem to get everything. I had read online that it can take months to get through an infestation, and it looked like we were heading that way.

So last night, we gave up. I had reached a place called Simply Nitty, which would bring in 2 people in the evening so that Beatrix would not miss camp.They had a fixed price, and while it was not cheap, they managed to get through everything in just over an hour, and they have a 30-day guarantee. I had not realized quite how bad it was until they were all gone.

So yes, it was expensive, and I wish he had not had to spend the money. But I'm not overly confined that this is an issue I could take on by myself. It's amazing how much time and energy this whole thing took up.