Pandemic Projects - Saving Money on Water with the Flume

A few weeks back, our insurance agent let us know that we could save $300/year on insurance if we got and installed Flume water monitors. They were specially priced for the insurance company at $169 each (plus shipping), and we could get one for both Ashland and Summit. It seemed like a no-brainer to us! Not only would we have some insurance premium savings, but we could monitor use, which is especially important when we are not at Summit. Recently, we had a situation where someone was staying there and for whatever reason the floater in the toilet did not float quite right just one time when it was flushed. It was a fluke accident, but flooded the bathroom and caused several hundred dollars worth of ceiling damage in the kitchen, so we took little convincing that was a good idea. 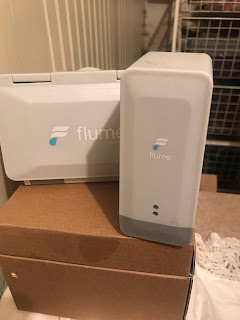 The Flume is advertised as installable yourself in 15 minutes, and I would say that was pretty accurate.

You have to locate the water meter: 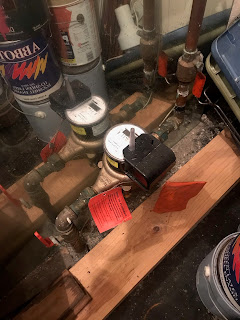 Take a picture with the app to be sure it's compatible (spoiler, it was).

Connect the small box to a power outlet so it can connect to the internet via the app. This was maybe the biggest problem, because not everyone has an outlet right by their water meter. Right now the cord extends across the floor, but we will probably neaten it up later.

Cinch the larger box to the water meter and set it so the smaller box can read it. 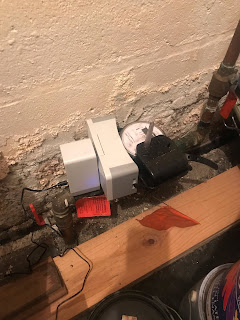 The you run the water a couple of times (it helps to have a basement sink and another person to run the water) so that it gets a sense of your usage. It does set an estimate based on our pool and sprinkler system.

That's it! I'm happy about the discount and the possibility of monitoring.

In January, I entered a contest online to win three hours of an organizer's time, in a contest generously sponsored by Leah Morris from Mindfully Minimized . This is the photo of my office space that I submitted to prove how badly I needed her help (if you're a client, you may not want to look....). Perhaps not shockingly, I won, I think because she felt sorry for me. You all know I struggle with minimalism. So, although I badly needed this, I was not at all sure it would work for me, or even if I was up to the task. I just don't ever seem to have the minimalist mindset. I was pretty sure I would end up in tears, and Leah would run screaming (or at the very least least kind of annoyed with me). Leah asked me to do very little prep, but my "homework" was to come up with thee words that described my space/the project. I chose: -  cluttered -  overwhelmed -  guilty The last word really wraps it up. Guilty for squandering space, for not keeping track of th
Read more