July 04, 2019
So secretly, I love firework shows. I understand they freak out dogs and vets with PTSD and find the amateur ones that go on far past the 4th of July annoying, but there's nothing like a good fireworks show. And I'm happy that American Independence Day is in July, because British fireworks for Guy Fawkes Day in November are cold!

We're often not even in the US for the 4th, but this year we were. After a couple of lovely, low-key parties, we found our way over to the super-secret neighborhood park where a band of unknown vigilantes sets off fireworks every year. I'd never been before (revoke my Saint Pau; card!), and last year was supposed to be the last, but a push for funding this year allowed it to happen, so we figured we had to go.

A ton of people were gathered by the time we got there, all through the park and on neighboring street corners. A tinny radio played heavily American-themed pop (think Proud to be an American and Old Town Road). Kids ran around with sparklers and light sticks.

Just as it got truly dark, a mysterious black pick-up pulled up onto the baseball field, and a group of dudes quickly unloaded the back, setting up lines of fireworks next to the Home Depot buckets of water. already placed on the gravel. Within a few minutes, one guy was coming over to tell the gaggle of young boys messing around near us to get off the field (though we had to yell at them a few ore times before they actually complied, I had to use my best mom-voice.) And then the fireworks started going off.

I've never been so close to fireworks that I've had ash rain down on to me. And it was awesome. Short bursts followed each other, but the show all together was spectacular.

This is what celebrating Independence Day means. Not some overpriced campaign rally with tanks and a VIP section in DC. But a whole bunch of neighbors getting together, and some mysterious band of dudes setting off a ton of fireworks. Building community. I love my city something fierce, and evenings like this are why. 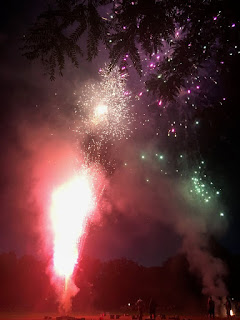