July 13, 2019
Running Aces is a sponsor of Circus Juventas, and tonight a bunch of staff made a field trip out there to check it out! 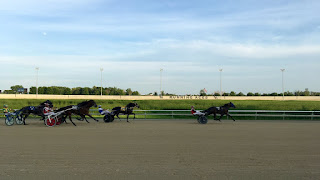 I've actually never seen a horse race before, mainly because I don't tend to gamble and I'm too cheap to pay the cover. If you are anything like me in that, Running Aces is a good solution, because there is no cover, you can go and watch the races for free! It's also harness racing, which is really interesting to see.

(Yes, I placed my first bet ever, on Custard's Dungeon in the 5th race. No, he did not win.)

We even got to have a group picture taken with one of the winning horse in the Winer's Box. A magnificent animal.

The rest of the place was pretty interesting as well. There are several gaming tables, but it's not overwhelming. There's also a trout pond, and several of us fished for our dinner. I caught the smallest trout ever (guess he was hungry!), but Patrick was patient and waited (and caught 4 that he did not totally hook) before catching an enormous fish! The clean and cook them up for you, and it was fresh and delicious. 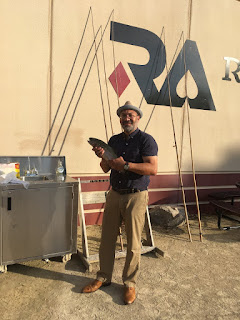 It was also "Cocktails and Donuts" night with Glam Doll donuts. Beatrix got a special cookie dough donut, plus a cute toy racing horse and a virgin cocktail. I stuck to IPA, but probably should have had a donut — but was so full (see earlier note regarding large fish cooked for us...) The whole place was very family-friendly, and I did not feel out of place with Beatrix at all.

They're also working on a new hotel, but that does not open until winter, so I can't speak to it.

We got to try a few of the different apps as well as the fish and the donut. The staff was so friendly and helpful, and I have to say that sitting on a shaded patio, watching horse race and hanging out with friends, was one of the best nights I've had in a long time! Thanks, awesome CJ staff and the great folks at Running Aces, for a fantastic night out!